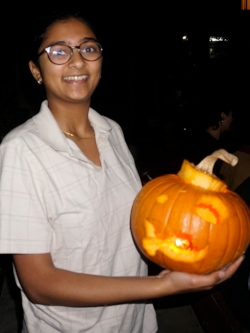 Beginnings: Student Housing for Everyone

During the dire times of the Great Depression students strained for resources were starting cooperatives throughout the country to save money on food and housing.  Additionally, many students faced racial and religious discrimination when looking for housing.  In February 1933, Harry Kingman, former YMCA director, inspired 14 UC Berkeley students to start the first student housing cooperative in Berkeley. 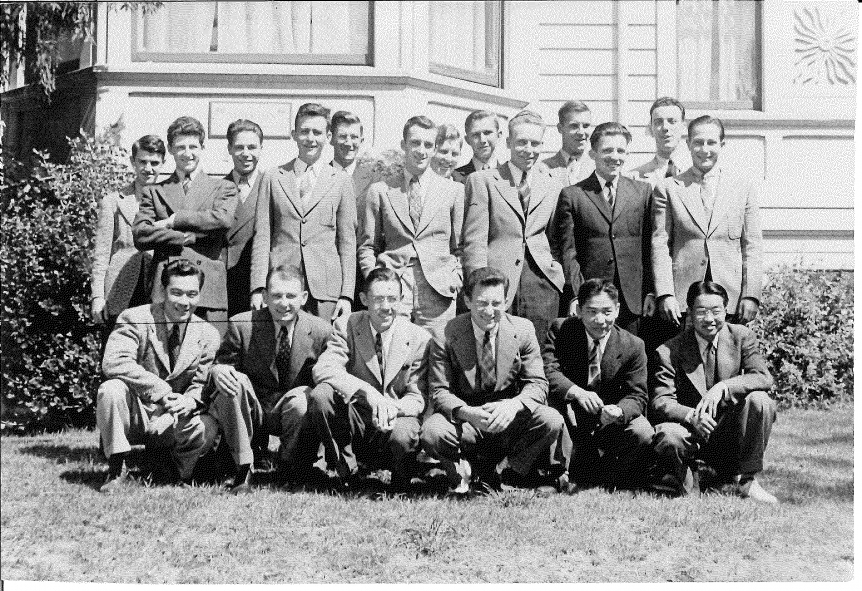 At its founding, the Co-op's goals included:

Antidiscrimination: To promote the social and general welfare of the community by offering low-rent housing to all university students, regardless of race, creed, color or national origin, and thus influence the community to eliminate prejudice and discrimination in housing.

Access to Education: To advance the cause of education by providing inexpensive board and lodging for university students with limited resources, so that those who might not otherwise be able to continue at the University because of economic need, may enjoy the fruits and the benefits of higher education

Expansion: To relieve the government of the State of California from the burden of building and operating state-owned dormitories by creating housing facilities for students at low cost on a cooperative basis; and to continually expand and extend those facilities in the community interest.

Member Education: To engage in a continuous educational program designed to eliminate prejudice and discrimination in housing, and to further the principles of tolerance and cooperation through mutual, self-help living at minimal cost.

The plan was a success, inspiring members to work all summer to raise capital to keep their co-op alive. In the Fall of '33 the students leased the original Barrington Hall housing 48 students (a new Barrington Hall housing 200 men opened in '35), and in the summer of '34 the students leased a second house which they named Sheridan Hall. The members of the two houses incorporated that year as the University of California Students' Cooperative Association (UCSCA). In its second year, the co-op also hired its first non-student general manager.

Despite a financial crisis in the summer of '34, which nearly foreclosed the co-op, the students managed to organize their books and in '36 leased Stebbins Hall, its first women's co-op, and in '38 leased the Sherman Hall, opened in 1942. The co-op also decided to rent Barrington Hall, which was in desperate need of repairs, to the U.S. Navy.

Despite some protest from membership, the Navy moved in in '43 and stayed until '48, renovating the building and making it fire safe. The War also brought on the U.S. policy of placing citizens of Japanese ancestry in internment camps. The Japanese Students' Club, located on Euclid, could no longer pay rent on its building. The UCSCA, therefore, ran it as Lexington Hall from 1943-48, until it was returned to the Japanese students.  The co-op eventually bought this house in 1968 and named it Euclid Hall.

In 1943, because of the shortage of men, Sheridan Hall closed, but in '45 the co-op prepared for the inevitable influx of GIs by purchasing Ridge House. In 1946, the co-op bought Cloyne Court, which at the time housed faculty.

No one was evicted as the co-op took over, creating interesting dynamics between co-opers and the older, professorial clientele. 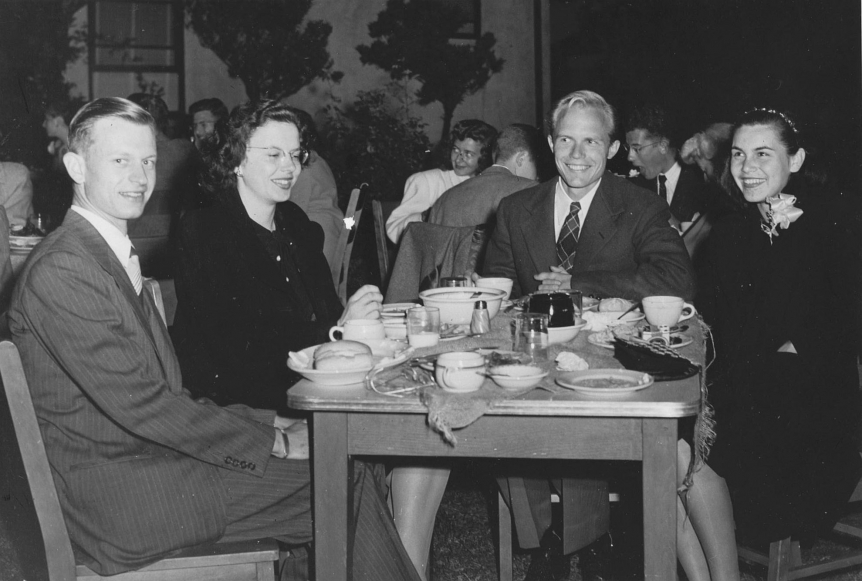 The Post-War conservatism on campus and around the country led to some controversies, such as a state law prohibiting the use of the title "University of California" in the name of any private organization - thus the UCSCA became the USCA. The Co-op was also compelled to sign a "loyalty oath" to the U.S. Government, just after purchasing its second women's residence, Hoyt Hall, in 1953.

American pride continued in 1958 when Eleanor Roosevelt spoke at the Co-op's 25th anniversary celebration. The co-op continued to expand with the purchase of Kidd Hall and one of the Northside Apartment buildings in 1960. The second Northside building was purchased in 1964. 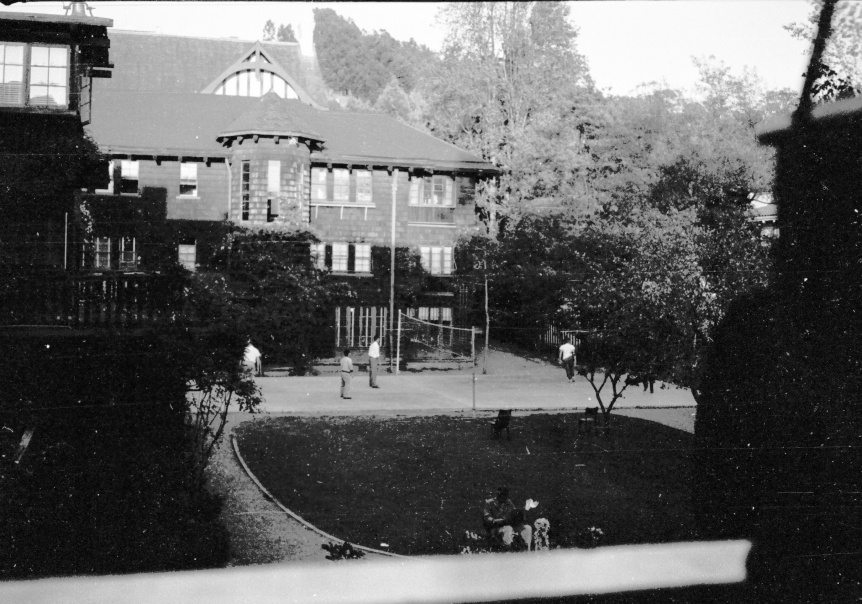 The changing times of the '60s were evident when the Co-op opened the first co-ed living situation on campus in 1966 known as the Ridge Project (renamed Casa Zimbabwe in 1987). The Ridge Project, funded largely by money donated by members, alumni, UC faculty, the Cowell Foundation, and cooperative organizations and individuals, provided the Co- op with a badly needed warehouse, Central Kitchen and office space, as well as housing for 128 students. 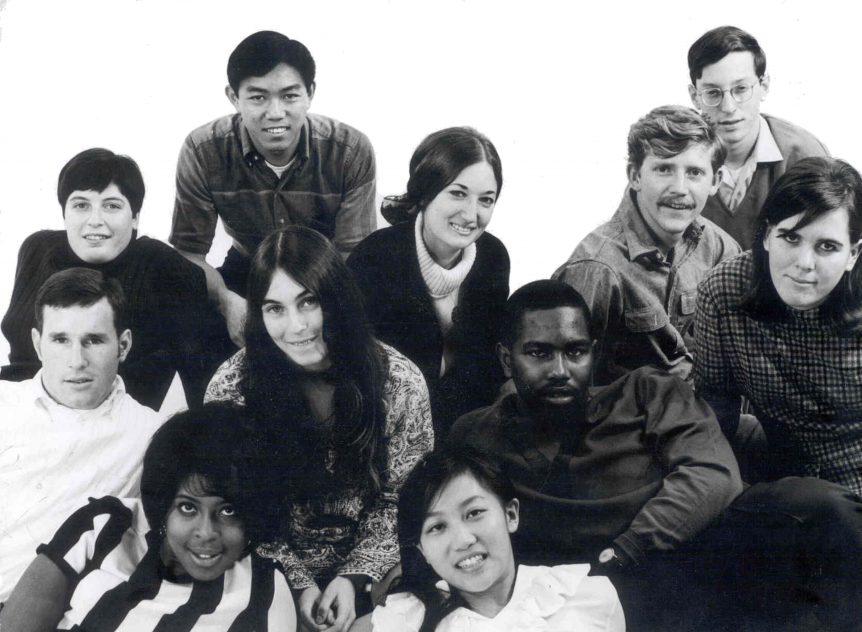 The '60s and '70s also brought a decline of the Greek system, and the co-op was able to obtain three former sororities at a reasonable price: Davis House in 1969; Andres Castro Arms (Now the Person of Color Theme House) in 1971; and Wolf House in 1974. Plans also began for the Rochdale Village Apartments, which opened in 1971, housing 262 students. Rochdale was built on University-owned land and financed by a low-interest loan from the Department of Housing and Urban Development.

Harry Kingman and the co-op had lobbied in Congress years earlier to make this sort of loan available for student co-ops.

In 1975, the Co-op opened its first all-vegetarian house, Lothlorien. Oxford Hall closed after the spring of 1977, having long been below city safety and earthquake codes. That fall, two new houses opened: Kingman Hall, former home of the Berkeley Living Love Center; and Le Chateau, a privately-owned "residence club" which featured the Co-op's first swimming pool.

In the winter of 1981, Fenwick Weaver's Village opened next to Rochdale. The decision to build it had been ratified by a co-op referendum in 1979, and it was financed by another HUD loan. 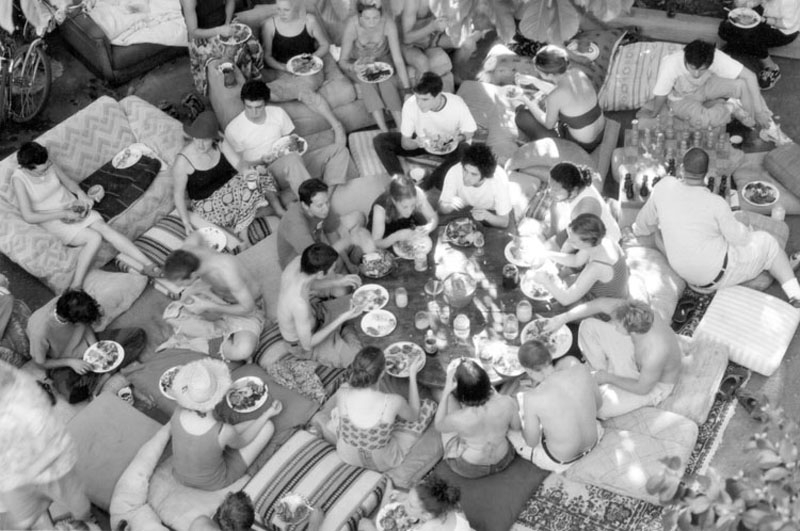 The USCA membership passed another referendum in 1989, this time to close the troubled Barrington Hall, due to the enormous liability problems that the co-op had developed. The size of the membership dropped with its closure until 1992, when the University contacted the USCA about leasing an old convent that the school had recently acquired.

After considerable debate, the Board of Directors decided to rent Convent as a graduate/re-entry student co-op. The African-American Theme House opened in Fall 1997. The Co-op acquired this house from the University when they closed it as the Slavic Languages House. The theme of this house was in response to the decision of the University of California to close all of their theme houses, including their African American themed house. Our latest acquisition, the Oscar Wilde House, a lesbian-gay-bisexual-transgender theme house, opened in Spring of 1999.

Again, the theme was selected for this house in recognition of the need for a place the queer community can call their own.

A Decade of Construction ('00s)

To meet the needs of members with disabilities, the Co-op also embarked on a Disabled Access Program to make as many of its houses and apartments wheelchair accessible.  As of now, 11 buildings have been fitted with accessible bathrooms, ramps, and/or elevators.

In the 2004, the Co-op began its largest construction project in its history - a $25 million earthquake retrofit program to bring all buildings up to modern earthquake safety standards.  With the typical co-op building being close to 100 years old, this involved adding steel frames, reinforcing walls with plywood, and strengthening foundation anchoring.  During this time, energy efficiency improvements such as insulation, new furnaces, and double pane windows were also installed.

As of 2012, $16 million of earthquake retrofitting has been completed.  Funding for these projects came from a combination of a bond, a portion of member fees, and generous contributions from Co-op alumni.

In 2007, the organization changed its name once again, to an even shorter acronym that more directly describes who we are: the Berkeley Student Cooperative. 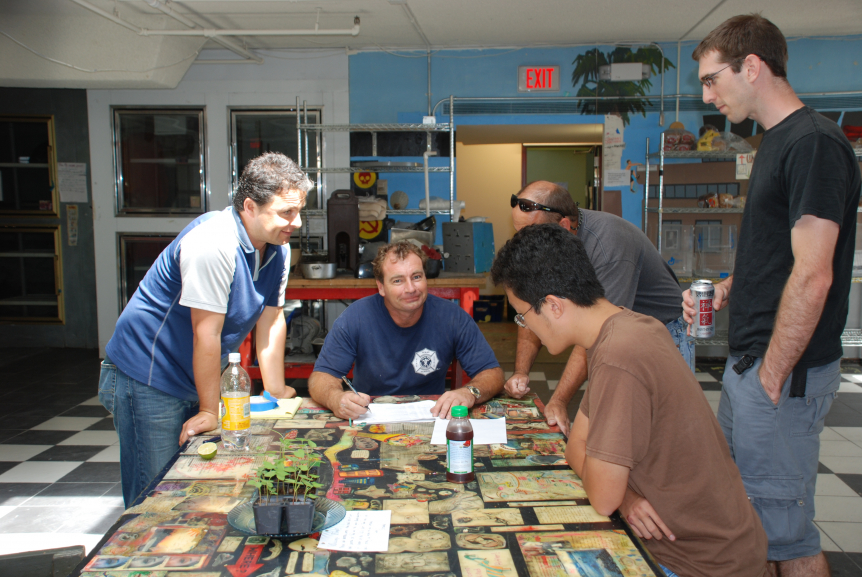 In today's hard times of economic recession and rising tuition, the Co-op remains committed to providing low-cost housing to students in the Bay Area, mitigating the high cost of education.  With rates less than half of the dorms, and some of the cheapest apartments near campus, the BSC remains popular among students with limited resources.  Over a third of members come from families with annual income of less than $50,000.

In 2012, the Co-ops lowered rent for the first time.  This was made possible by increasing summer occupancy.  Member leaders and staff are continuing to search for new efficiencies in procurement and operations to further cut costs and lower rent.

Currently, the BSC's membership stands at almost 1300 people, with hundreds waitlisted at the start of every Fall.  To enable the BSC to serve more students, the Co-op is exploring the idea of expanding.  At recent meetings, students expressed interest in serving more graduate students and students in the Educational Opportunity Program for first-generation college students.  In recent years, the BSC has also provided grants and assistance help the Berkeley Student Food Collective open its storefront and the Davis Domes to perform renovations and stay open.

Whatever direction the future of our organization takes, it will continue to be determined as it has throughout the co-op's history - by student members who have built it: those members who own it and who run it. 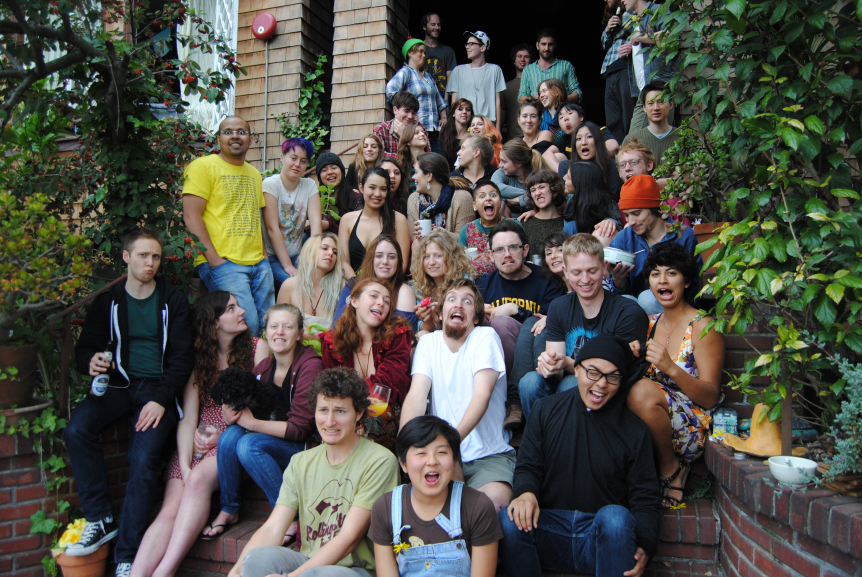