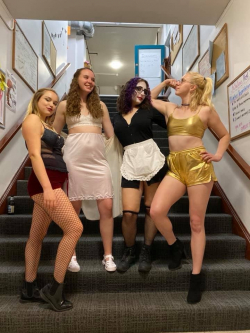 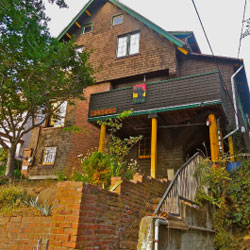 This funky eleven-bedroom house in the Berkeley Hills has beautiful views of the San Francisco Bay as seen from the Certified Best Roof in the BSC. It is located within easy walking distance of campus and Strawberry Canyon, perfect whether you are going to class or on a moonlight hike with fellow housemates.

The African-American Theme House (informally known as "Afro House", “The Afro-Haitian Dorm”, or “Nyumba ya Bwana”) fosters a supportive community for people of all backgrounds. Its diverse population reflects the house theme by hosting meetings and events in support of African-American student groups. Members of the house are expected to invest a few hours every semester doing outreach, contributing meaningfully to the African-American community at large.

Afro House's atmosphere is that of a log-cabin tree-house palace-shack in a spaceship piloted by Marvin Gaye, orbiting eternally around Cloud City. Dinners are a central part of house bonding, with everyone seated around a single large table. Social events include dances (including the recurring Jock Jamz theme), music and story nights, celebrations of the yearly Afrocalypse, and special dinners like our soul food Thanksgiving. On any given night, you are sure to find residents studying with others in the dining room, discussing any range of subjects while screening films on the state-of-the-art projection system, or reveling in one of eleven of some of the best rooms you'll see in the State of California.